Expo 2012, including an AP video link and the Article

We even had video AP coverage of our Expo this year.

The below article was used in over 130 media from papers to TV news stories with the video.

COLUMBUS, Ohio (AP) — Used to be, Dad would stuff a half-dozen maps in the glove box before setting out with the family on a road trip to see the waterfalls at Yosemite or the granite faces of Mount Rushmore. Colorful maps bearing the logos of the oil companies that printed them — names like Texaco, Gulf, Esso — once brimmed from displays at filling stations, free for the taking.

But of the more than 35 million Americans expected to travel by car this Fourth of July, a good chunk will probably reach for technology before they’re tempted to unfold — and in a tradition that used to bind Americans as tightly as a highway cloverleaf, try to refold — a paper road map.

Websites like MapQuest and Google Maps simplified trip planning. Affordable GPS devices and built-in navigation on smartphones downright transformed it — and transportation agencies around the country are noticing, printing fewer maps to cut department costs or just acknowledging that public demand is down.

“Suddenly, everyone was buying a Garmin or a TomTom,” he said. “That’s the year I thought, ‘Oh, it’s finally happened.'”

Transportation departments around the country are in the middle of reprioritizing their spending amid times of falling revenue, and paper maps could be on the chopping block, said Bob Cullen, spokesman for the American Association of State Highway and Transportation Officials.

“Just based on the current climate, there have been some cuts,” he said. “I would expect map printing to be one area that’s been targeted.”

In late June, at the annual exposition of the Road Map Collectors Association in Dublin, Ohio, collector Terry Palmer was selling some of his beloved maps. The 65-year-old from Dallas, Texas, wore a T-shirt with intricate route lines of the United States on his chest, back and arms.

“The GPS of course now being so available, a lot of new cars are coming out with built-in GPS. People are utilizing those, and they don’t want a road map,” he said. “A lot of the younger generation, they’re used to having their phone, and they don’t need a road map to figure out where to go.”

In Georgia, officials are printing about 1.6 million maps to cover a two-year period — less than half of what they were printing a decade ago. In Pennsylvania, where officials say public demand has gone down, about 750,000 maps are being printed — way down from more than 3 million in 2000.

Officials in Oklahoma and Ohio also say map printing is down, and Washington state discontinued them altogether by 2009 because of budget shortfalls.

But in other states, printing has remained steady because maps remain popular at visiting centers. In Missouri, officials say they’re printing about 1.5 million maps for a two- to three-year period, consistent with printing from a decade ago. Officials in Connecticut, Mississippi and Nebraska also say printing has remained the same.

It’s unclear why some states are affected more than others. Some speculate certain regions affect how people travel there. In Delaware, for example, officials attributed a jump in printing of about 100,000 maps to people visiting beach areas and renewed real-estate interest.

“Simpler times are something everyone yearns for. And maybe looking at a map takes you back,” he said. “The technology is neat, but on a personal level, there’s a sense of nostalgia when you look at the paper map. A lot of people are yearning for simpler times.”

At the collectors’ association exposition, a carpeted ballroom at an Embassy Suites hotel outside Columbus featured old road maps for sale, and gave collectors a glimpse into an era of romanticized advertising — brightly colored paper maps promising the sunny beaches of Florida, the mountains of Montana and Chicago’s famous skyline.

Free roadside maps boomed between the 1920s and 1970s, when oil companies worked with a handful of publishers. As major highways were being built, those maps became synonymous with the possibilities of the open road.

Dick Bloom, a founding member of the group, has been collecting maps since he was 10. The retired airline pilot from Danville, Ky., said there used to be an element of surprise in road trips.

Transportation agencies aren’t the only ones printing paper road maps. Companies like AAA and Rand McNally have been in the business for decades and are just as synonymous with trip planning.

Members of AAA, whose services are fully integrated online and include a TripTik mobile app, requested more than 14 million paper guides in 2010, spokeswoman Heather Hunter said. The number of paper maps AAA prints has declined, but she wouldn’t go into detail.

Rand McNally is known for its road atlases but also offers an interactive travel website and GPS devices; it declined to comment on how many maps it’s printing these days.

Carrier, now a consultant in the mapping and travel publishing industry, said the additional services from traditional mapping companies show the incredible potential in the industry.

“There’s no question in the U.S. that traditional road maps are diminished,” he said. “But there are other areas of the map industry that are thriving and even growing.”

Charlie Regan, who runs the maps division for National Geographic, said the company has sold more paper map products in the past three years than it has ever sold since launching the division in 1915. He attributed it to customers learning to appreciate good map data — and also noted that sales of international maps have remained consistent, and that sales of recreational hiking maps are on the rise.

“It’s almost like a golden age in mapping. More people than ever before in history are using maps every day,” he said. “For me, that’s fantastic, and it’s an opportunity.”

What most people agree on is that paper road maps will not go away quietly, like pay phones and phone books. Chris Turner, a collector from Jeffersonville, Ind., shook his head at the notion of paper maps becoming obsolete.

“With a GPS or other mapping system that you might use, you feel like you’re beholden to the GPS lady. You know? ‘Turn left here. Recalculating.’ Well, with a map, you can trace your route and you can decide for yourself still where you want to go.

“And if you want to vary from the GPS lady, so be it,” he said. “But you’re armed with that knowledge from that map to do that.”

Some photos from June 22nd and June 23rd, at Dublin, Ohio. 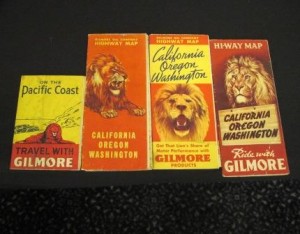 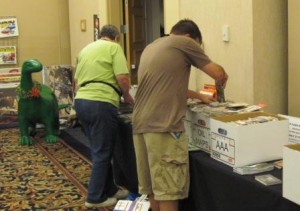 Bev and Brian at the $1 table 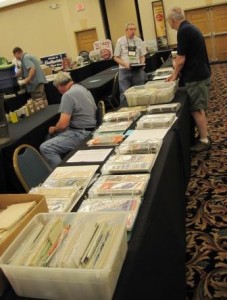 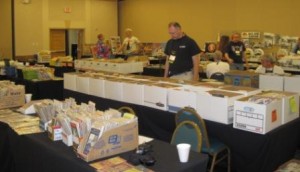 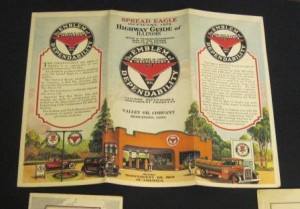 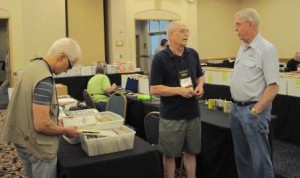 And what about these? 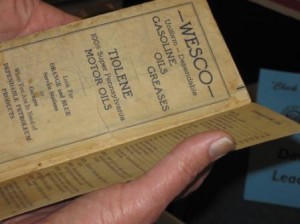